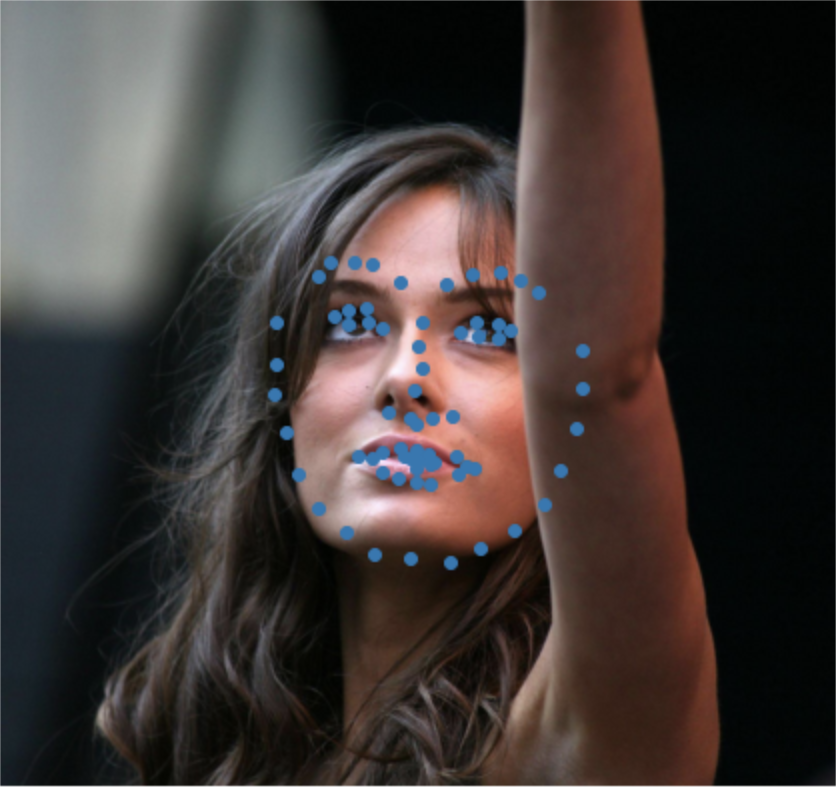 The initial task is to detect just a single key point, the tip of a person's nose. The steps I will take to do this are to first collect a dataset of faces with an annotated nose key point. Then I will train a simple network to predict the x and y coordinate of the key point.

The dataset I will be using is the IMM Face Database with has 240 images of faces with 58 annotated keypoints each. However, for this part, we will only concern ourselves with the nose tip key point. For splits, I went with a 80-20 split for training vs validation data thus I train on 192 images and validate on 48 images.

For preprocessing, I first resize the images from their original size of (480, 640) to a smaller size of (60, 80). Each image is also grayscaled and then normalized to have pixel values in the range of (-0.5, 0.5). I also recalculate the labels to be relative coordinates (i.e. the keypoint (x, y) would be represented as a ratio of the image width and height). This way, the label values range from 0-1 which helps improve training by bounding the loss.

Since the images are relatively small and we are only predicting a singular point, it is sufficient to train a relatively small convolutional neural network. Pictured below is the model architecture and hyperparameters used.

Pictured on the left is the loss history of the model while training. Since validation loss is normally just slightly higher than training loss, this means our model is not overfitting and is generalizing well.

Pictured above were two apparent succcesses. One theory I have for why these succeeded is due to the clear one-sided lighting. This lighting makes it easy to find the midway point of the face and then model just has to find the point along the vertical.

Pictured above were two apparent failures. I believe these failed because they did not have a clear one-sided lighting like the two successes. This extra complexity likely is what makes it difficult for our small model to make predictions as accurately.

The first variable I varied was the learning rate. Pictured below are the different training curves of each run. 1e-3 converged the fastest; 1e-4 was able to converge slightly slower than 1e-3; 1e-5 trained much slower but eventually still converged.

The second variable I varied was number of channels per layer. Overall, it seemed that more channels trained faster. This is counter-intuitive for me because I would have thought that more parameters would take longer to train.

The dataset we are using has 58 annotated keypoints, so let's see if we can predict all 58 points. To do this, we not only need a larger model, but we are going to need a larger dataset; 192 images is not enough to properly fit 58 points. Thus we are going introduce data augmentations to pseudo-increase the size of our dataset.

The general idea of data augmentatin is simple: randomly augment our data as it is being loaded into the training loop. This will make it so that we rarely train on exactly the same image and will help us generalize. The data augmentations I chose to use were random color jitters and random rotations and translations.

Pictured below are examples of random transformations applied to a single image.

For this part, I tried two different models: a medium sized model and a large model. Additionally, I introduced a dropout layer after each convolution to help prevent overfitting.

Results of the medium neural network on the training data.

Results of the large neural network on the training data.

Results of the medium neural network on the validation data.

Results of the large neural network on the validation data.

Results of the large neural network on the validation data.

Pictured above were two apparent succcesses. These likely succeeded because their face shape is pretty average and the image is straight on. Additionally, there is little augmentation in the two images.

Pictured above were two apparent failures. The first failure was likely because of the turned head however the model was still able learn a shape that looks almost like a turned head. My theory for the second failure is that it is an extreme rotation (i.e. the rotation is the farthest rotation possibly in my code thus has little training data for it).

One obversations I had about these kernels, particularly in the larger model's learned kernels, is that a few of the kernels very clearly do actually look like edge detectors.

With working experience of models, we now want to see if we can train on a truly larger dataset. The dataset I will be using is Zhe Cao's ibug_300W_large_face_landmark_dataset. This dataset contains 6666 images of faces with 68 annotated keypoints. Additionally, there is a final test set with 1007 images. Given the 6666 images, I opted for a 85-15 split of training to validation images.

In many of the images, the actual faces only take up a small portion of the image. As a result, I cropped the images such that the face made up the majority of the frame. For this section, I also opted to train my models using colored images instead of grayscale images. For transformations, I once again applied color jitters, and random affine transformations. Finally, since I plan to use a pre-trained ResNet18 model, I normalize each image with the same means and standard deviations used in the ResNet paper as well as resized to be 224x224 pixels.

Pictured above are example training images after cropping and transformations.
**Note that colors are strange because of colorjitter and normalization transformations**

I opted to implement transfer learning and train off of a pretrained ResNet18. After some experiments, I found that a learning rate of 1e-3 would often converge after 25-30 epochs thus I decided to add a learning rate scheduler that multiplied the learning rate by 0.1 after 30 epochs to get a little more fine-tuned accuracy.

Pictured on the left is the loss history of the model while training. First observation is that validation data follows training data well meaning we are generalizing well. Additionally, we can clearly see that the learning rate scheduler (which took a step on epoch 30) helped the model achieve a little more improvement in the loss.

Pictured above are the results of the trained model. Training data and validation data are both very accurate. Most surprisingly is how well it does on test data. The test data does well despite the wide variety of face sizes. I personally would think that all the rescaling would lose some detail in facial structure but the model still appears robust to it.

Evidently the gorilla image failed. Interestingly, the image with the face mask is able to find the correct shape of the face but is clearly lost on the fine details such as a nose and mouth. For the image obscured by hair, the model also struggles to find the eyes. Both of these observations are actually good because they suggest that the network actually learns the features corresponding to each keypoint.

With an automatic facial keypoint detector, we now have a method to automate face morphing entirely. It is a faily simple process as well: use the neural network model to detect the keypoints and then pass these points into our face morphing algorithm. Pictured below is a face morph done between my housemates and our significant others produced without manually selecting any keypoints.